Finally, I got around to buying my own domain name last week - chaitanyagupta.com. I wanted to do it for the past several months... but laziness always got the better of me. Not this time, though. A cousin of mine who wanted to build a greeting site (and buy his own domain for that) finally prompted me to get one for myself. Also, the week long holiday really helped.

This means that this blog has a new home - chaitanyagupta.com/blog/

Great, its all under my control now...

Good for those Greeks, they discovered the Olympics just in time (776 BC). When your timescale is the rise and fall of civilizations, the inhabitants of TIET, Patiala, missed that honour by a mere whisker. (Ok, so its cliched). Didn't get what I am talking about? See for yourself... 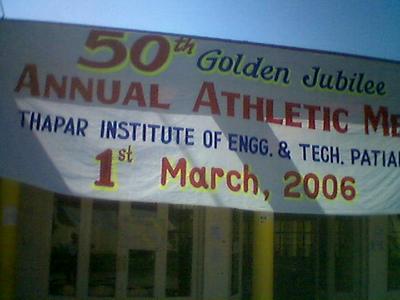 [UPDATE]
Forgot to mention this - who was the "chief guest" at the event? Well, who else, but the first person of Indian athletics - Milkha Singh.