Its been a few days since the race, and I have been procrastinating over writing about it ever since. Here it is finally -- I finished the 21K in 2:19:02, nearly 10 minutes faster than what I did in Mumbai earlier in the year, something I had not at all expected before the start -- I was only hoping to finish it under 2:30 hours, just as I had done in Mumbai! 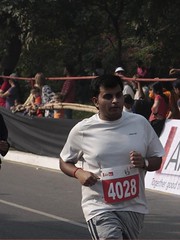 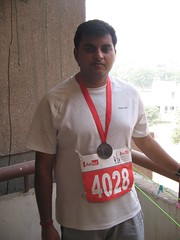 I had never realized I could do this time -- in fact all my training runs were pointing to a 2:30+ 21K run! Felt a bit giddy after the race, but it was only for a few minutes. A nice Iodex massage (that was a great thing to do -- have volunteers massage your feet and legs after the race -- Mumbai are you listening?) and a banana and an apple later, I was feeling as good as ever.
Next up is Running and Living marathon and a half in Gurgaon on December 6th, where I'll be running the 21K again, and then the half in Mumbai in January. Hope that fitness and timings keep improving, over the next couple of months, at least.

Comments:
It was wonderful to read your experience. It makes one feel to do the same to feel the kind of happiness and satisfaction I can read in those words and see in your face.
All the best for the next 21k. You will clock less than 2:15 this time :)

Thanks Malhotraey! Hopefully it will inspire you also to do the same ;)